Codependency in Relationships: How to Recognize & Prevent It 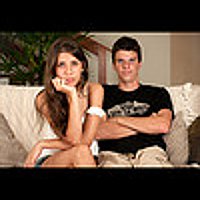 Codependency in relationships happens when people don’t openly admit what they want from each other in reality because they have given up on the real thing, such as love, feeling valuable, or empowered. What they are attached to are symbols for what they want that they think they can control. For example, it might be certain behaviors from each other, such as taking out the trash, buying you flowers, not interrupting you, or doing things your way. Codependency in relationships is like a closed circuit, letting nothing outside of it come in that would disrupt the controlled world both of you are holding in place that feels safe. It is a state that avoids the truth of the here-and-now.

In codependency, each partner often relies on the relationship being in a particular form or role (such as marriage or boy/girlfriend). In this role, each feels entitled to receiving certain things from the other, whether he or she wants to give it or not, in any particular moment, or whether it’s the truth about what exists between you. This enables each partner to avoid dealing with their own emotional issues that keep them lacking what matters to them and prevents them getting fulfilled in reality. A codependent form-type relationship enables you to avoid the here-and-now. It therefore it feels safer and more comfortable. In this type of relationship, what is true between each other is assumed, according to what the agreed upon roles are rather than finding out what actually exists between you.

With healthy relationships that are not leaning on forms for receiving what each or you desires, it is necessary to fully acknowledge, on an on-going basis, what’s really there in the relationship. Therefore, it requires, from each of you, a deeper level of honesty and risk.  This kind of relationship can be in a form, such as marriage, if that form matches what is actually true. The form is defined by what is true, not the other way around. This kind of relationship is developed by becoming aware of, and saying the truth of, what exists between you and what each wants in relation to each other, as well as, with others. It is leaning on truth rather than form. There is no sense of owning each other. This kind of relationship is based in the here-and-now, rather than fantasy or delusion.

At the bottom of codependency in relationships are limiting decisions* that keep you from directly receiving what really matters to you.