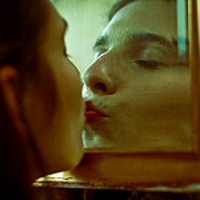 People with the defense system of narcissism are usually in relationship with those who have a lot of self-hate. It is an interlocking emotional defense system* that both sides of the equation are holding in place. Below are excerpts of comments I said to two clients in NLP TimeLine sessions:

To a female client who has a lot of self-hatred and is in a relationship with a man who has the defense system of narcissism:

“In relationships with a narcissist, he’s the only one who exists, from his point-of-view. That’s what he’s trying to create. He tells you whether you’re valuable or not. He’s the one who determines what reality is. From his point-of-view it’s all about him. You really don’t matter, except to serve him and puff him up, while he’s living on your substance, but never acknowledging it. For a person like you who believes she doesn’t exist, he is a perfect partner, at least temporarily. He wants you not to exist. Otherwise if you exist, then he ceases to be the center of attention. And then you would have needs and demands on him. It means he has to actually be there, and he is invested in not being there.”

The solution for a person with self-hatred generally has to do with clearing limiting decisions** having to do with self-esteem, such as “I’m not good enough,” “I’m not lovable,” and “I’m not wanted.”

To a male client who has the defense system of narcissism:

(This excerpt came up over the fact that he has a lot of trouble using a computer): “Narcissism is a form of manipulating people in a fantasy world, instead of dealing with the real world. A lot of narcissists can function extremely well, but it’s on their own terms. You’re so good at manipulating other people, you can set things up the way you want them to be, but you can’t do that with a computer. You can’t manipulate a computer. You can either conform to exactly what it requires, or you can’t succeed with it.”

It is central to the defense system of narcissism to keep the control in a love situation. A narcissist doesn’t need anybody. Other people always need him. He’s never the one who feels powerless. Other people feel powerless and he has all of the control. And that’s the way he has to keep it.”

Author’s Bio: Jane Ilene Cohen is an Intuitive & Transformational NLP Counselor and an NLP & TimeLine Master Practitioner, with a private practice in San Diego North County (Encinitas). She does individual counseling (includes the NLP TimeLine Process and hypnosis), works with couples and families, and facilitates groups and workshops. She is also the Founder of the “Life is Designed to Work” thought system.

For more about Jane’s counseling services, go to: JaneCohenCounseling.com . For a free phone consultation to decide if this is right for you, call Jane at (760) 753-0733.