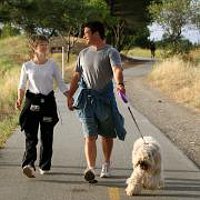 Facilitating people in releasing the limiting decisions that cause their lives not to work brings me much joy and fulfillment. The results of releasing specific decisions are generally much larger than what the initial issue seemed to be. Henry’s experience is an example of this.

Henry’s wife had just bought a new dog, which she hadn’t consulted with Henry about. The dog would follow his wife all around the house, and she felt very attached to it. But the dog avoided Henry, which brought up some very painful feelings for him.

Henry told his wife he wasn’t sure he wanted to keep the dog because it made him feel so badly. But she felt he should be able to get over it because the problem was in him and not about the dog. This brought up a great deal of pain in Henry and he was thinking about getting rid of the dog, which would have caused conflict with his wife.

Henry’s initial perception was that the dog avoiding him, and his wife not caring, were the cause of his unhappiness. He had a choice of whether or not to dig his heels in and hold onto that as his reality and make himself miserable. Many of us, in similar circumstances, do stubbornly dig our heels in and insist that this is the reality of the situation. We then make it the world we are living in, totally oblivious that we are the ones creating it.

When Henry came in for a TimeLine session, we uncovered the limiting decision in him at the bottom of his painful reactions. The decision was that how he feels doesn’t matter to those he’s dependent on (as represented by his wife).

The situation with the dog brought to consciousness what he had been completely unconscious of, so he could break through it. This limiting decision had been there all along (since early childhood) and was a deep issue that had been undermining his life and limiting his relationship with his wife up until then. Believing that he doesn’t matter had been blocking him from allowing in the depth of love that truly exists between him and his wife.

Releasing the limiting decision (in the TimeLine process) resulted in him being in a more open and loving relationship with his wife. In addition, he realized that he really likes the dog, and the dog ended up liking him.