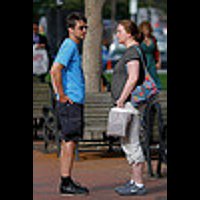 A large percentage of the issues people bring to me have to do with their relationship problems. Being in relationship can be very challenging. They can offer deep fulfillment on many different levels, but they can also bring up some of the deepest emotional conflicts we have. It can be unclear how to know if our responses toward each other are in reality or if they come from our own issues.

Here is an example from an NLP TimeLine session with a client, I’ll call Ron. Ron had been married to Terri for 11 years. Terri seemed to be unhappy much of the time, was critical of Ron, and always had something to complain about. No matter what Ron did to please her and make her happy, it never seemed to make things better.

In the NLP TimeLine session, after exploring this issue, we uncovered Ron’s limiting decision* that “he’s to blame for the unhappiness of the woman he’s dependent on.” Now you might wonder how recognizing and clearing this limiting decision* could make things better between them. It wouldn’t solve the problem of Terri’s unhappiness. How could it help create harmony and happiness in their relationship?

Before clearing the limiting decision*, both Ron and Terri believed that Ron was to blame for Terri’s unhappiness — and, therefore, somehow he was responsible for making it better. (Terri had her own limiting decisions* that were contributing to this dysfunctional dynamic in their relationship. However, she was not interested in working on them.)

Under hypnosis, in the NLP TimeLine Process, we cleared Ron’s limiting decision*. As a result, Ron was no longer holding in place that he was responsible for Terri’s unhappiness. He was no longer participating in this codependent dynamic between them in their relationship, in which he couldn’t differentiate himself from her. He was no longer supporting Terri in leaning on him as the sole source of her happiness or lack of happiness. This allowed him to be supportive of her in reality.

Clearing this is different than Ron just consciously knowing that he isn’t responsible for Terri’s unhappiness. It is shifting his whole perception of reality in that area of his life. It is shifting the ground he is standing on. He is now holding in place a more solid experience of what is real that enables life to work.

Ron no longer taking responsibility for Terri’s unhappiness put pressure on Terri to find an actual solution; and it brought Ron and Terri closer to being able to relate to each other in a way in which real fulfillment is possible in their relationship.